Pills but no needle is often the road to addiction

Pills but no needle is often the road to addiction 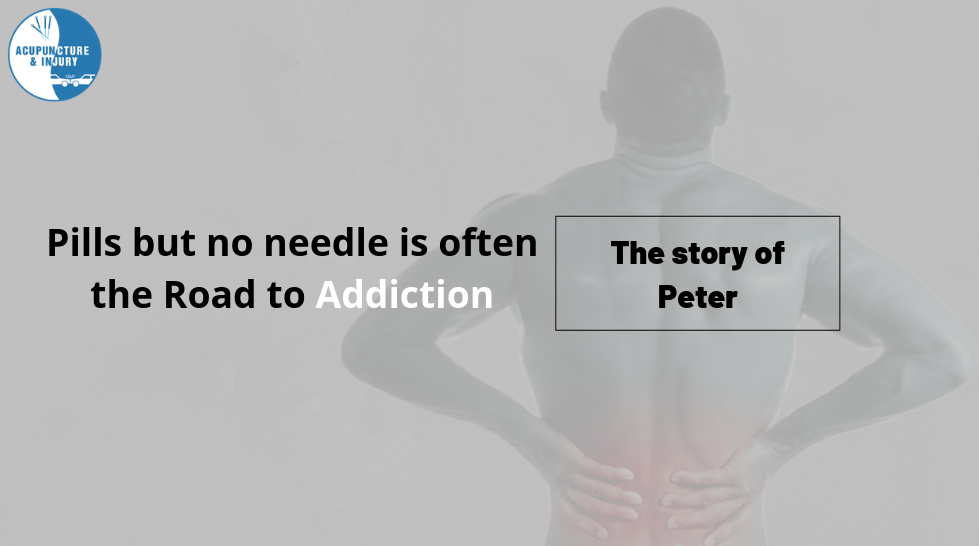 The story of Peter

The story of Peter. Peter had the unfortunate circumstance of being injured an automobile accident in Georgia. He was uninsured at the time of his accident. His lawyer was able to settle Peter’s case but after the lawyer took 40% of the gross personal injury settlement and negotiated lower fees for Peter’s doctors, the attorney had pocketed more money than Peter! Matters were made worse when, Peter continued to have chronic pain from his injuries. Peter was still uninsured and when he tried to obtain insurance, his monthly premium quotes were in the excess of $500a month. A cash visit to a Pain Management Doctor was less than $300 and would at least give him pain relief.

During his Pain Management Therapy, Peter wasn’t able to afford injections such as epidurals, he wasn’t offered acupuncture and he had already had chiropractic during his original treatment with his auto accident. He stated:“I want to try something else. The chiropractor helped but I am still in pain.”Peter had a several visits with a physical therapist but became discouraged and angry saying “all they do is charge me to teach me exercises that I can do at home!” He had no primary care doctor due to lack of insurance. The Pain Management Specialist only offered Peter opiate pain pills since Peter couldn’t afford interventional treatments and the pain doctor didn’t perform acupuncture.

Peter was able to continue to work construction and handyman jobs due to the relief provided by the pain pills. However, Peter became more physically dependent on the pain pills. After a while, Peter’s doctor became uncomfortable prescribing Peter higher doses of his medication. Peter then turned to marijuana and CBD oil to make up for the pain relief that the pills no longer provided. As a result, Peter tested positive for a urine drug screen and was discharged by his Pain Management Doctor.

Peter was still unable to get insurance due to the high premiums and out right denials caused by his “preexisting condition” from his auto accident. After being discharged from his pain doctor’s office, Peter tried to enter another pain clinic. He was told things like “it’s a 4- 6 week wait to get in after we review your records” and “we only accept new pain patients by referral from other doctors”. Peter was still having pain and needed to work. He started obtaining pills on the street. He experimented with other forms of opiates and even tried Heroin. Peter’s drug used became more than a dependence he had crossed over into the realm of addiction. He was missing work to seek out drugs, resorting to selling drugs, stealing and other activities he could engage in to get the money to fuel his habit. Eventually, Peter lost his job, was homeless and had alienated his family due to his addiction. He finally hit rock bottom and overdosed on Fentanyl which was manufactured on the street to look like the Oxycodone he had been used to taking.

While In the hospital, Peter was diagnosed with Hepatitis (apparently from his previous intravenous drug use). Upon discharge he was referred to Methadone treatment. Peter asked about Methadone alternatives but was told by his doctor there were none. Peter had heard about and occasionally used Suboxone during his time “on the streets”. Peter remembered Suboxone decreasing his cravings and making him feel“normal” without feeling groggy and short of breath like he did with methadone. Peter looked around and inquired about Opioid Treatment Centers and finally found a Suboxone Treatment Center where he could pay cash at a reasonable price. The Addiction Treatment in Georgia center was able to change Peter from methadone to Suboxone. Peter was also introduced to acupuncture to treat his chronic pain from the auto accident injuries. Peter was shocked at how much better he felt after a course of 10 acupuncture treatments. Peter said, “ I wish I had known about these needles before I took all those pills!”

As Peter continued his Suboxone and Addiction Treatment in Georgia, he was eventually able to find work again. He started and continued counseling at a church nearby (as he couldn’t afford a professional counselor without insurance). Peter learned to cope with life’s ups and downs. He learned coping skills and how to avoid triggers. He even learned to tolerate the judgmental look he received from the pharmacist when he filled his Suboxone prescription. He found it odd and often chuckled to himself at the irony.Peter remembered it was the same look he received when he would get his Oxycodone prescription filled in the past.

Eventually, Peter was old enough to obtain Medicare. He had lost homes, jobs family and had permanent liver damage. When he had his first Medicare exam he was offered opiates for his chronic pain. Peter refused stating he would “pay out of pocket” for acupuncture (which isn’t covered by Medicare). Peter’s Medicare doctor was always surprised by Peter’s insistence that acupuncture was controlling his pain. Despite Peter stating his pain was well controlled, Peters’ doctor continued to offer opiates. One day Peter finally became annoyed and asked: “Pills? Is that all you have? You do know that I have liver damage?, Right? Why do you keep trying to get me to take pills? Don’t you realize that the acupuncture needles have saved me from so much pain? If I had known about those needles I would have probably never taken the pills that got me into so much trouble!! WHAT IS IT THAT YOU DON”T UNDERSTAND ABOUT THAT!!!??

Peter’s doctor said,“well we don’t have studies or insurance approval stating that acupuncture really works.” Peter became more upset and said” DO YOU THINK I NEED A STUDY TO TELL ME THAT MY PAIN IS BETTER? ACUPUNCTURE HAS BEEN AROUND FOR THOUSANDS OF YEARS AND YOU ARE TALKING TO ME ABOUT STUDIES?? REALLY? REALLY? DO YOU EVEN KINOW ANYTHING ABOUT ACUPUNCTURE? Peter’s doctor then said, No I have not studied acupuncture. I am a medical doctor. Peter then said, acupuncture has got me “Pain Free without Pills”TM you doctors all have something to learn!

This website uses cookies to improve your experience while you navigate through the website. Out of these, the cookies that are categorized as necessary are stored on your browser as they are essential for the working of basic functionalities of the website. We also use third-party cookies that help us analyze and understand how you use this website. These cookies will be stored in your browser only with your consent. You also have the option to opt-out of these cookies. But opting out of some of these cookies may affect your browsing experience.
Necessary Always Enabled
Necessary cookies are absolutely essential for the website to function properly. These cookies ensure basic functionalities and security features of the website, anonymously.
Functional
Functional cookies help to perform certain functionalities like sharing the content of the website on social media platforms, collect feedbacks, and other third-party features.
Performance
Performance cookies are used to understand and analyze the key performance indexes of the website which helps in delivering a better user experience for the visitors.
Analytics
Analytical cookies are used to understand how visitors interact with the website. These cookies help provide information on metrics the number of visitors, bounce rate, traffic source, etc.
Advertisement
Advertisement cookies are used to provide visitors with relevant ads and marketing campaigns. These cookies track visitors across websites and collect information to provide customized ads.
Others
Other uncategorized cookies are those that are being analyzed and have not been classified into a category as yet.
SAVE & ACCEPT